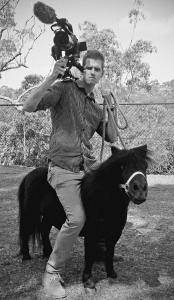 David May is a talented up and coming cinematographer who shoots and produces MATV’s eclectic mix of animal stories.

He’s a can do enthusiastic guy who gets on well with both animals and humans! When he’s not filming animal stories he can be found time-lapseing the night sky at 2am, hanging off cars shooting music videos and writing the occasional comedy pilot.